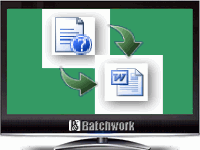 Batch HXS TO DOC Converter supports an efficient Multi-Thread conversion engine. So you could control the conversion action very easily. You can stop or pause and continue it in any time.

You can save your conversion work in a project file (.batch-hxs2doc) for re-use. You can run the batch-hxs2doc project in Microsoft Windows Explorer or command line directly.